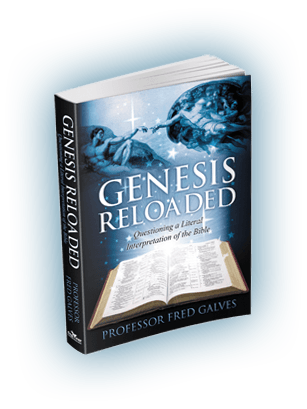 Professor Fred Galves’ first non-legal release published by Dog Ear Publishing is a fascinating exploration of the line between literal and scientific interpretations of the Bible. Galves carefully looks at various competing schools of thought when analyzing the centuries-old debate between science and spirituality.

Professor Galves is a lifelong Catholic who believes in God, and finds the Bible to be a source of valuable lessons and insight into his faith; however, he also has a great deal of trouble with a literal interpretation of the text, if such an interpretation is really even possible. There are many ideas within the sacred scriptures that are confusing, if not completely ridiculous, to the modern mind. This tension between modern science and implausible biblical stories leads Galves to analyze the differences between certifiable facts and long-held spiritual beliefs.

Professor Galves considers an array of questions that many spiritual or religious people grapple with on a regular basis—questions involving belief, without proof, of God’s role in the creation of the earth, as well as questions pondering the violence and Bronze Age beliefs that drench the Old Testament. Galves leverages almost 30 years of law practice and teaching, as well as his own religious upbringing, to unearth answers to many questions that face a modern, plausible understanding of the Bible.

Genesis Reloaded: Questioning a Literal Interpretation of the Bible is a provocative blend of the rational and the spiritual that will lead readers to delve back into the scripture with a renewed interest. Author Professor Fred Galves, a graduate of Harvard Law School, had been a law professor at Pacific McGeorge School of Law since 1993, having recently retired in 2015; he continues teaching Evidence, Civil Procedure and Street Law among other classes at several Universities, and has done human rights work in Chile with the Catholic church.

Enjoy on your Kindle